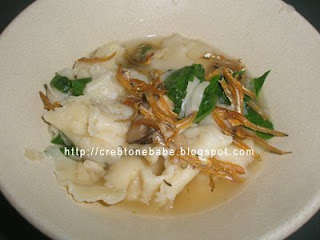 Since I dislike porridge recently,
Mummy cracking head to think and introduce new food to me...
This time,
She cook homemade mien fen gao,
Or more popularly called pan mee...

Mixing flour and water as the main ingredient.
She didn't add in egg as I'm still allergy to eggie...
As for the soup,
She first fried onion and garlic,
And added in ikan bilis and mushroom,
To increase the aroma of the soup,
Not to forget some greenish vegetables,
Which is my favourite...
Mummy didn't cook the mien fen gao inside the soup..
Instead she boiled another pot of hot water,
To cook only the mee...
Later on,
She fried another bowl of ikan bilis,
As she thinks it'll taste better to eat the mien fen gao,
With the fried ikan bilis...

I love this dishes!~
Especially the fried ikan bilis!~
Mummy seldom fried anything for me to eat,
As she thinks it's quite oily~~~~~
I enjoy chewing and eating the crispy cruncky ikan bilis,
Together with mummy's homemade mien fen gao!~

Email ThisBlogThis!Share to TwitterShare to FacebookShare to Pinterest
Labels: Noodles