Mummy prepared pasta for me, as promised!
Since this is my first pasta meal,
Mummy choose Angel Hair as she thinks the texture is softer and looks easier to digest~~~~~~ 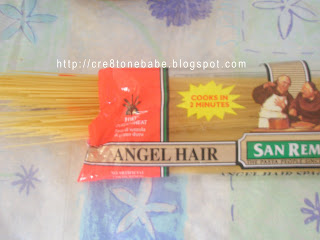 In order to prepare a balanced diet for me,
Mummy actually cut some papaya as a starter~~~
She boiled angel hair for around 20 minutes,
While boiling, she fries fish for me...
Wouldn't it be too oily to fry?
After frying,
Mummy boil the fish few seconds in the water...
Still crispy, but not oily...
Together with green vegetables...
And mix it together and cut the pasta
And also smash it into tiny pieces before feeding me!~ 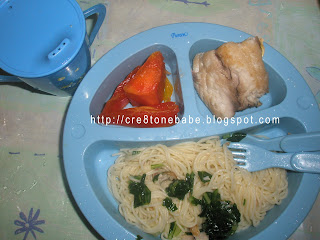 While eating,
I found that it's little bit dry...
Mummy didn't add any sauce or seasonings...
She said she wants me to taste taste of pasta~~~
Well, She later on actually add in some milk,
Refering to other's mummies advice while she's preparing smash potato...
Now, it taste better, not so dry and with added milk taste!~

I actually enjoyed chewing pasta!~
Rather than eating porridge everyday,
This is something different!~

Mummy said since this is the first time eating pasta,
She dunno if my digestion fit for digesting pasta or not,
So, didn't let me finish off the whole plate...
Mummy said she'll prepare macaroni for me next time~~~
Ok then,
I'll wait and see how's her macaroni taste like...

Email ThisBlogThis!Share to TwitterShare to FacebookShare to Pinterest
Labels: Italiano

This is actually not my first time eating sweet corn...
Anyhow, this weekend mummy add more sweet corn to my porridge...
To look yellowish!~ I suppose...
And it actually taste sweeter...
Let's glimpse how mummy prepare this sweet sweet porridge... 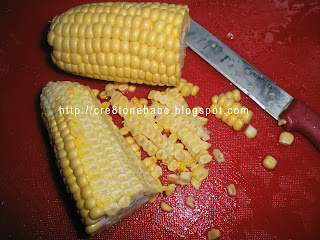 Mummy cut the corn into tiny tiny pieces again...
Put it as main ingredients for my porridge~~~~~~
After it's boiled,
Add in some fish...
Taste even sweeter!~
Even just a little bit of fishy~~~ 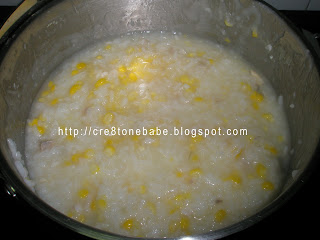 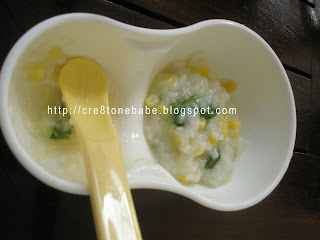 Again,
I finish whole pot of the porridge!~
This is sooooooo sweet!~
Yummy yummy...

Weekend is always my happy day!~
Where daddy and mummy will stay with me 24 hours,
Where daddy will bring us for outings,
Where mummy will have lots of time to cook me new food to try!~

Since mummy said she gonna cook colourful porridge...
I'll see what she'll comes up with next!~
Kind of looking forward... hmm... 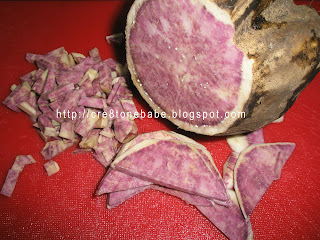 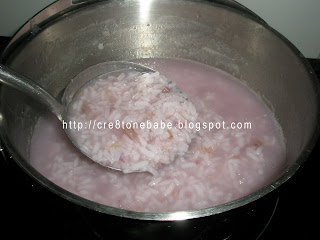 Wanna know how it taste like?
I actually finish the whole pot of porridge, again!~
What a satisfying meal...
Mummy, cook more nice nice food~~~
I want to eat!~

Mummy been introducing me with Colours and Shape,
Using my block toy,
And also my ladybird book...
Now she even prepare porridge with different colours...
Here it is,
My first orange pumpkin porridge!~
Let's start with how mummy introduce this new food to me!~ 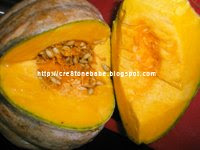 Actually, mummy wants to cook pumpkin for me since long ago~~~~~
Finally, daddy bought a big pumpkin back!~

At first, mummy boiled the pumpkin and smash it!~
Mummy asking if I can accept the taste or not,
Since this is my first try!~
And I show her a weird weird look!~
As I really thinks the pumpkin taste weird. 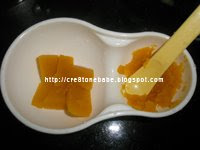 Later on, mummy boiled potato and add in to my pumpkin...
Smash potato-pumpkin...
Well, it actually taste ok...

Since I gave green light to mummy to cook pumpkin,
She prepare it in my porridge for me!~
My potato-pumpkin porridge!~
After mummy taste it,
She said still lack of something!~
She added in some meat!~
And this time,
The porridge actually did taste real yummy!~
I finish whole pot of porridge!~ The whole pumpkin is real huge!~
I actually cannot finish it all...
What to do with the remaining pumpkin?
Mummy fried it with ikan bilis and make it as their meal!~ 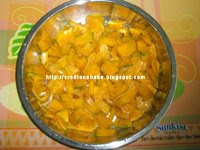 They have it with this... vegetables... 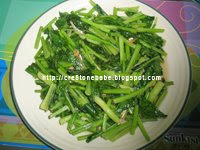 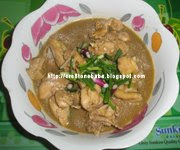 They eat so many dishes!~
And I only allow to eat porridge!~
Since pumpkin porridge taste quite nice,
Never mind then...
Mummy, please cook more new food for me next time...

Mummy try add milk to my smash potato,
After getting advice from other mummies,
For the first time,
I thought it taste weird...
But when I try another spoon,
It actually taste ok~~~
And now,
I start to love the taste of smash potato + milk!~
Nice combination... 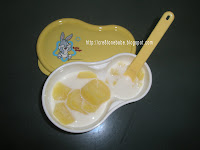 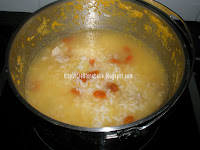 After little Sarah taste her porridge with chinese herbs,
Mummy try to for me, also!~
I love it!~

Special thankx for all mummies who share baby food's recipe!~
I can taste lots and lots of new yummy food......
:)

Originated from 'Little Prince'
Posted by cre8tone at 3:20 AM No comments: